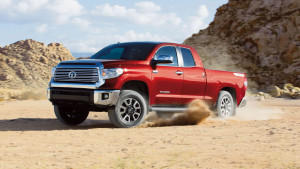 Vince Sheppard of Houma, Louisiana bought his 2007 Toyota Tundra basically right off of the assembly line, and he has since travelled more than one million miles in the same truck, with the same transmission and the same engine it started with. We doubt that many drivers around Blythewood or Orangeburg will be surprised, but we encourage you to keep reading to learn how Sheppard’s Tundra kept kicking.

For work, Sheppard traveled nearly 125,000 miles a year for regular business trips to Wyoming, South Dakota, and Virginia. The funny thing is, the triple-digit-traveler wasn’t surprised by how far his truck had gone.

Sheppard told Toyota’s press team, “I believed [reaching a million miles] wouldn’t be a problem. These trucks are safe and dependable. I think, if you see a Toyota on the side of the road, it might be a scam because they just don’t break down very often.”

But the million-mile mark wasn’t just luck and trust in a durable truck. Sheppard watched and cared for his vehicle. In the last nine years, the Louisiana man took his 2007 Tundra to the dealership 117 times for everything from timing belt replacements to oil changes and regularly scheduled check-ins.

Sheppard and his truck have caused quite the ruckus among Toyota and its engineers. They have actually traded Sheppard a 2016 Tundra for his truck-heard-round-the-nation so they can disassemble it and see exactly how it was able to achieve such longevity.

How Can I Get the Most from My Toyota?

The Toyota Tundra’s Longevity is Impressive — How Far Can You Take It?

Try your luck at reaching the million-mile mark, whether you’re trying to achieve that longevity in a Toyota Tundra or a different Toyota truck, but let all of us at Dick Dyer Toyota in Columbia, SC help you do it right. Contact us today for a test drive or to schedule service. We welcome drivers from Lexington, Blythewood, and the surrounding communities, and we hope to see you soon!

0 comment(s) so far on The Million-Mile Toyota Tundra